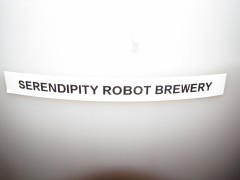 Our Uncle Robot is an expert home made ginger beer brewer. He’s been home brewing all sorts of concoctions for years but has perfected a fine drop of the old non-alcoholic ginger beer. And there’s nothing like a chilled glass of ginger beer on a hot summer’s day!

Chris loves ginger beer too and until now has always relied on the generosity of Uncle Robot who has provided us with a fairly steady supply over the years. The problem is that Chris hasn’t been particularly good at sharing Robot’s ginger beer and as each new batch arrives, marked by the unmistakable clinking of bottles, he guards them like a Maremma dog protecting it’s flock! Only on occasion are we privileged to sample a ‘small glass’ of the delightful drop.

Late last year we all agreed enough was enough and started working on Chris to make his own ginger beer. We were all sick of hearing the familiar retort ‘I haven’t got time’ and although Robot was reluctant to give up his dutiful role, as a compromise he agreed to teach Chris how to make his own starting with an easy foolproof method. We were not only going to recycle bottles, but save money by making our own and apart from the odd ingredient and initial set up costs each ginger beer will cost less than 40 cents to make. Sounded good to us!

With an end to the tight ginger beer allocations in sight, Robot, Roz and Luke set off on a mission to collect the bottles.  We needed at least 60 non screw cap glass bottles, preferable the 375mL size, both perfect for this type of brewing process and an ideal quantity to quench one’s thirst. They were collected from parties, family barbecues, mates, the cricket, colleagues, even Byron Bay and before we knew it, we had enough for our first batch of ginger beer. All the bottles were washed, dried and stored upside-down to ensure no creepy crawlies got in. 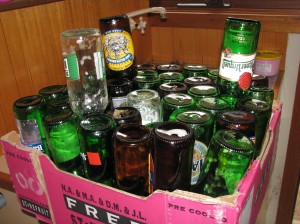 Chris recieved a bag of bottle top lids from Roz for Christmas and a few weeks ago, Uncle Robot arrived with the rest of the gear. We were finally under way.

The laundry was cleared and cleaned! and a suitable space was allocated for the Serendipity Robot Brewery. Powdered ginger root, yeast, appropriate amounts of water and sugar were mixed and heated and put into a 20L food quality barrel and were left to stand for an hour or so while Robot and Chris watched the cricket.  In the meantime, I grated up a big chunk of fresh organic ginger which was added to some water and boiled up for about 10 minutes. The house filled with the glorious smell of sweet hot ginger.

The ginger was strained then added to the liquid mix and then it was let to sit yet again while they went off to watch the cricket. They occasionally returned to keep the mix stirred and apparently Australia was nailing it.

When the right amount of time had passed, a glass air lock was inserted into the lid and a spring loaded tap was fitted into the bottom.  Then, in between stumps, wickets and pitches, the two of them filled and capped 62 bottles of ginger beer leaving just enough room at the top of each for ‘breathing space’.

The whole process took around 3 hours and the bottles were stored upright in boxes in our cool room behind the kitchen where they’ve been resting ever since. This ginger beer process and mixture allows the brew to ferment in the bottle and takes around 3 to 4 weeks to fully cure. Following this ginger beer making process means there’s little chance of explosion as it’s a tried and tested recipe and it doesn’t need to be refrigerated which is usually required to slow down the fermentation process. Now alcoholic ginger beer….that’s a totally different story.

Although there’s not much chance that our family will wait any longer than the required curing time, apparently ginger beer does get better with age and the longer you can leave it the better. Chris has specifically set aside two larger bottles of his first brew which he’ll keep for one year, along with samples from subsequent batches. Hopefully we’ll all be present when he unveils the cellared  bottles so we can share in the taste test.

In the meantime, we only have a short wait until we can finally clink our glasses and toast to a new skill learnt, the first batch of home brewed ginger beer and the spirit of sharing, a fundamental principle of Permaculture.

And we can hardly wait!

Stay tuned for my next post…..food for all seasons.