A new visitor drops by

We had a new visitor arrive in our garden last Saturday morning and on our return from a walk with the dogs, we were greeted by Luke and Roz who told us there was a ‘present from nature’ on the deck!

They definitely had our curiosity so we charged downstairs and this is what we found: a very large Diamond Python curled up in one of our plant pots.

A few years ago we kept a beautiful Diamond Python we’d affectionately called Monty. He was our education snake and when he wasn’t working, lived comfortably on our deck in a large cage. He was well fed and very easy to handle as we’d raised him from a young age so he was accustomed to being handled. He grew very quickly and within about 18 months was healthy and strong and about 1.5 metres long.

We’re still not sure how, but somehow he’d managed to prize open the lid of his cage just enough to squeeze through. The first time it happened we found him a couple of days letter, hanging around on one of the deck posts not far from his cage. A few weeks later it happened again but we never tried to track him down after that and let him return to his natural hunting ground in the adjoining national park. 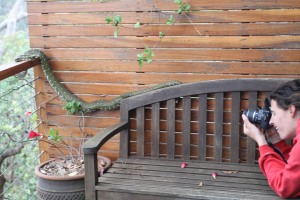 We’ve had a few snakes pass through our property over the years but never once have any of them bothered us. Although this isn’t the biggest Diamond Python we’ve seen, it’s definitely the largest that’s wandered in of it’s own accord.

The size of this one would suggest that he’s not only quite old but he’s a very successful hunter. On this occasion his experience has led him to the network of indiscernible native rat tracks that surround our house and even though we can’t detect them, he certainly can. Following the scent, this smart tracker has come across the perfect opportunity to trap a meal or two of delicious native bush rats – Rattus fuscipes.

We’ve always had bush rats here but there’s been a definite increase in numbers since the chooks arrived. It’s simply because there’s more food available in the form of veggie scraps and grain. And like snakes, rats only need the smallest of gaps to squeeze through so they’ve been helping themselves and breeding up accordingly.

On dusk, when disturbed, bush rats dart like lightening back to their camps via the rock edge at the back of the Chook Nook.  I had my suspicions that the little scoundrels had stolen an egg or too from the nesting boxes so we soon sorted that out by plugging all the small gaps and locking the chooks in their pen at night. That did the trick but it was obvious they were still hanging around as there was a noticeable amount of rat poo accumulating along the rock wall.

Our smart friend the python had sussed the situation right out. His forked tongue would have been working overtime as he sniffed out the exact locations of the camps and he spent the first night curled up on the corner of the Chook Nook roof, directly above the most active camp. The next morning we found him on the other side of the Chook Nook, curled up comfortably happily digesting his dinner. He was directly above the second access point where I’ve seen little rats scampering out of the Chook Nook and he was beautifully positioned with the lower part of his body anchored against a pole and his head and upper body recoiled within perfect striking distance of the ground. And he waited there all day without moving a muscle.

He stayed in that same spot for about 3 days and each morning we found him curled up with an unmistakable lump in his stomach. Like all animals he eats for survival but as a predator he has an important part to play in the eco system. His appetite helps to reduce the local rat population which in turn allows insects, fungi and small plants to thrive, which in turn provide food and shelter for other insects and micro organisms. It also provides our Permaculture system with a form of natural pest control.

And there’s no need to worry about the native rats dying out because he hasn’t eaten all of them; he’s more clever than that. He’s left enough to enable a population to be bred up again this summer and I’m sure he’ll be back some time in the future when the population of native rats has reached a point that will draw his attention to them once again.

Nature is incredible and by applying the first Permaculture Principle of ‘Observe and Interact’ we can watch natural systems at work and learn how to work with them rather than against them. In this case, allowing a beautiful creature to hunt undisturbed in our garden has provided us with a useful pest control service, even if only temporarily!

One response to “A new visitor drops by”